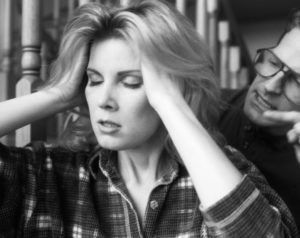 Since I wrote The Relationship Trap, I have been trying to understand how someone can remain in an abusive relationship.  In my book, fourteen women describe relationships they entered, ignoring the warning signs that said, this guy’s not for you! A number of those relationships were abusive and the women never realized what was happening. What is the common thread?

I found that you don’t know you’re in an abusive relationship until you look at it from the outside. However, here’s one clue: you are constantly defending yourself while you’re in it.

This year, I created an updated edition to The Relationship Trap, in which I discuss the characteristics of abuse since it is so prevalent nowadays. And it all occurs behind closed doors. Outside the home, no one suspects this is an abusive relationship. The minute the door closes, it begins.

Is it possible that you are in an abusive relationship? Do you make excuses and try to be “better?” Do you think: If he hit me, I’d be out of here in a minute. Well, a person can be “hit” with words. And words can hit as hard as a fist. That’s psychological abuse!

* PLEASE NOTE: I refer to the abuser as “he,” but there are plenty of abusive women in this world. I am just addressing this to women because there are more abusive men out there than abusive women.

Just ask yourself one simple question: Am I walking on eggshells? If the answer is yes, you may be in an abusive situation.  That’s a big clue!

THE CYCLE OF ABUSE

INCIDENT OCCURS, such as:

THEN THE CYCLE BEGINS AGAIN

So, are you walking on eggshells? Or do you know someone who fits the description?

The Second Amendment was written during the Revolution to protect and arm American citizens in their fight for freedom, against the British and the French, as well. Now the situation in our country has sadly changed. Citizens want to prote

ct themselves against violent offenders. “Keep a gun under your pillow…you never know when you might need it.” We’re not fighting the British and the French any more. What’s wrong with this picture?

The Second Amendment of the United States Constitution reads: “A well regulated Militia, being necessary to the security of a free State, the right of the people to keep and bear Arms, shall not be infringed.”

According to an article by the Cornell School of Law,   (https://www.law.cornell.edu/wex/second_amendment)     on one hand, some scholars believe that the Amendment’s phrase “the right of the people to keep and bear Arms” creates an individual constitutional right for citizens of the United States. “Under this individual right theory, the United States Constitution restricts legislative bodies from prohibiting firearm possession, or at the very least, the Amendment renders prohibitory and restrictive regulation presumably unconstitutional.

On the other hand, there is the collective rights theory, in which some scholars argue that the Framers intended only to restrict Congress from legislating away a state’s right to self-defense. They claim citizens do not have an individual right to possess guns and that only local, state, and federal authorities have that right.”

My cousin owns a gun and has asked me several times if I would like to go to a firing range with her to learn to shoot a gun. She has one so she can protect herself one day if needed. So far, I have not taken her up on her offer, but one day I might have to, if this rampage of violence continues. Las Vegas. Parkland. I worry. Don’t you worry?

Nowadays, many students are afraid, wondering if their school is next. We need to increase the safety of schools nationwide by developing realistically implemented means of protection through individualized school safety programs, policies, and activities. We do not need to arm teachers! One teacher, when interviewed, said before she could unlock a cabinet where a gun might be held, she could be killed; why arm teachers? We need to work on preventing the violence.

And it’s time to…

The right of people to bear arms should not be applicable to assault weapons. No private citizen should own an assault weapon. It should only be used by a member of the armed forces in warfare. It has no use in the hands of anyone else, except for creating violence, for slaughtering innocent people.

But what can we do about that?

We can join the peaceful student movement and demand change. The students understand the need for change and started the movement against school violence.  That movement must not fade away. We must pick up the gauntlet and join them.The students should not have to bear the entire responsibility to bring about change. They must not stand alone. We need to join them.

Parents should march alongside their children! And demand change! Say, Me Too!

Work to improve mental health care for persons with violent fantasies or acts.

Write your representative in Congress and ask him or her to change the gun laws, to ban the sale and ownership of automatic weapons. If enough members of Congress are deluged with demands for change, perhaps they can defy the powerful NRA lobby and work to protect the citizens of our country.

* For more information: Cornell School of Law Article on the interpretation of the Second Amendment: